Congratulations!  You have taken the time to turn over the card and follow the Green Slimeball ball down into the cesspool.   If you were expecting some creepy or epic music to start playing, sorry to have already let you down.
Only those with the QR will find this latest information and discover more of the mystery here, where the Pickled Aliens dwell.  There is no other link to access this page.

Please know, you are welcome here in the horde of Pickled Aliens Pottery.  If you like to read, then this is the one page on this site that has a good bit of words.
Scroll down for answers to some FAQs.

This year introduced the human series, which has brought a new character to the forefront of the narrative and no one seems to care.  It is Workman Scott, The Time Traveler.   Also, the return of Harold from the Pickled Aliens Pottery Greenhouse Shed.

Human Series  part 1 - THE TIME TRAVELER
The Time Traveler has arrived.  Workman Scott is part of the human series rolling out from Pickled Aliens Pottery.   He is in search of the origins of a lost civilization that predated the Creepy Alien Babies , a mysterious culture that Workman Scott believes is responsible for the disappearance of the original Pickled Aliens.  We have yet to learn from when Workman Scott originates.
The Workman Scott mug is about 450 ml capacity.

Human Series part 2 - HAROLD
Harold was a head planter example for a project at school a few years ago.  He then was replicated in two sizes and sold due to popular demand.  This year he returned as a coffee mug in the original style and a new style named mocha.

Human Series part 3 - Bernard
I should say that my work in pots influences a bit of my clay work at school, #ifyouknowyouknow.  It come back the other direction and why am I just now mentioning this?  Workman Scott, Harold, and Bernard are all names given to examples of human face jug examples at school that I have brought their likeness to the Pickled Aliens side.  Bernard is somewhere to be found in my instagram posts as an eggplant looking jug.  He is now the face on a number of jugs that I had a blast throwing and sculpting on.  Bernard has been also known as Eugene, Viktor,  and Nestor.

Chambray and the Spector - oh yeah Human Series part 4
I used up the last bit of my Chambray glaze this year to see what I could get out of it's floating nature when applied correctly from a batch mixed at correct specific gravity.... just follow the directions!  Got some good floats and texture compliments.  In the midst of using white stoneware I made a few little weird forms and the face of Bernard went on them, topped with Chambray and there you have the Specter.  The first apparition from Pickled Aliens.

CURMUDGEONS!!!!
I had such a great run with the Curmudgeon Series the past three years.  They will return again perhaps glazed differently in the future.  I have no idea about colors there.

KILN FAILURES
I am very much still limping in some regard from the multiple problems I have encountered with glazes and firing that arrived suddenly kept coming after months of firing on all cylinders making work I have enjoyed and with which glazing started off perfectly.  I ruined a good amount of pots including some bowls I worked hard on to crank out.  Sadly the failures prevented a new line of Slimeballs and Bavarian Warlock Trolls to be released for the holiday sales.

AFTERMATH
Lots of changes will occur behind the scenes with glaze and firing.  I'm not going to go into details about that but I have been simplifying  the glaze palette for a couple of years and this really has solidified some things.  I am tossing out some old glazes and ways of doing things.  Why beat your head against the wall about some of the same crap year after year?
Answers to FAQs

How do you come up with names for them?
The voices in my head tell me what to do.
Seriously though, I like to research things everywhere from names for sounds to Russian mythological creatures.

Do you do custom orders?
Sometimes, but usually not.  Well, here and there if I can get a piece made while I am in production already.  This is truly a small-batch operation.

Is this what you do full-time?
I am an Art Teacher by day.

What clay do you use?
I use a variety of Standard Ceramics clay bodies fired to cone 5/6 usually in an electric oxidation atmosphere.  Porcelain is used to make the eyes, horns and teeth.

Where is your studio?
Pickled Aliens Pottery is made in my basement, greenhouse shed and back yard.

Where do you get your inspiration from?
I like narratives and stories.  Of course I am a bit of a sci-fi fan.  May the Force Be with You... Always. 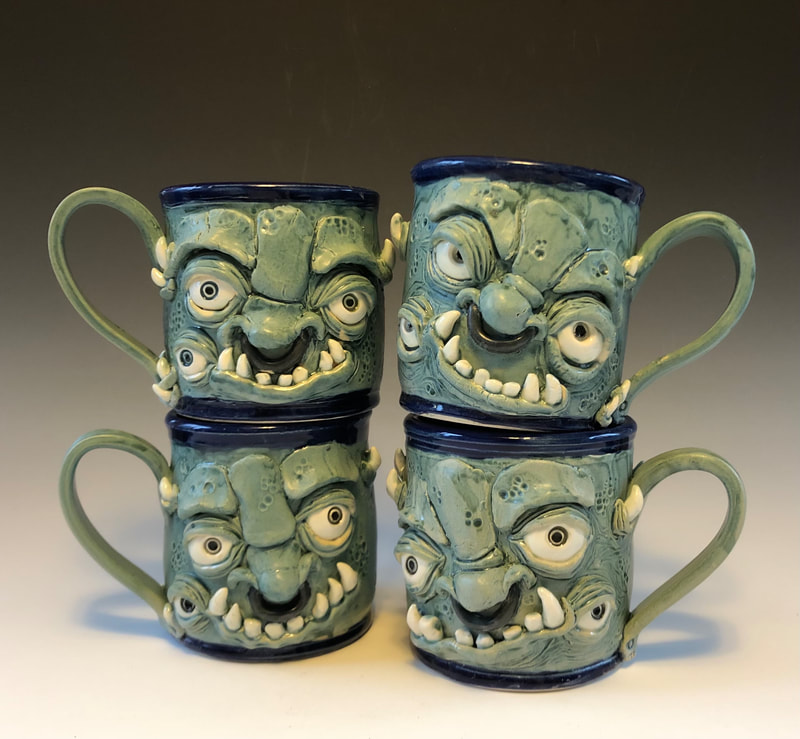 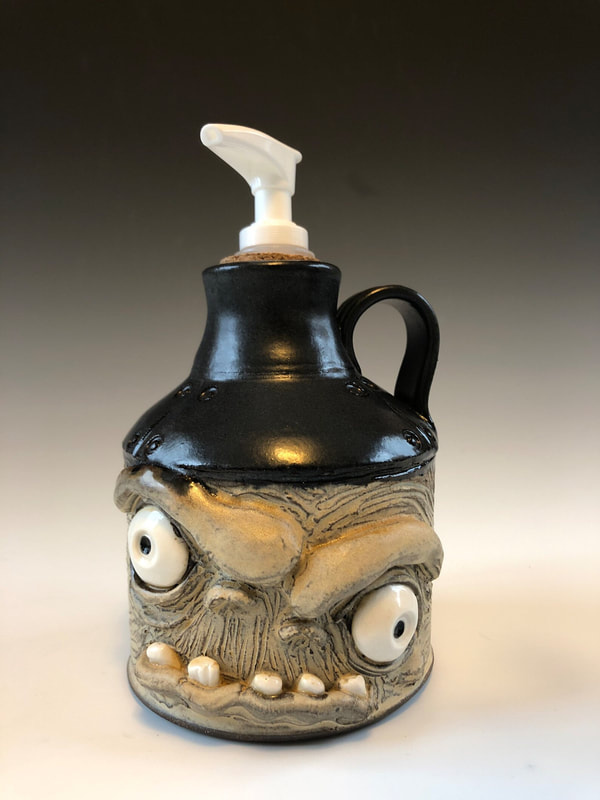 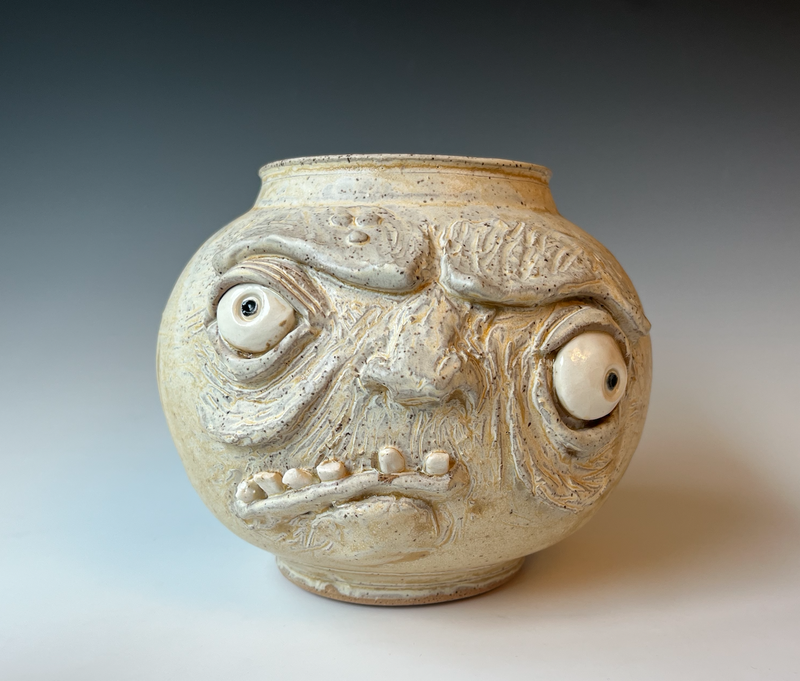 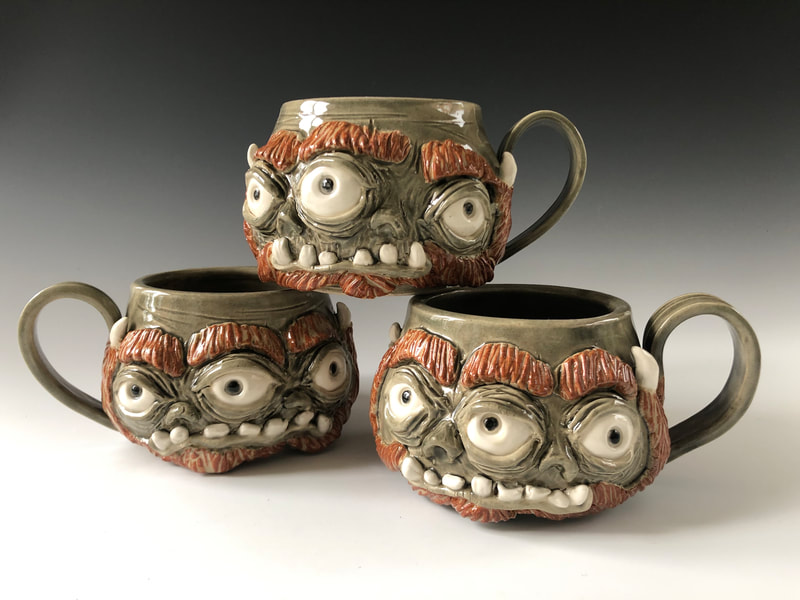